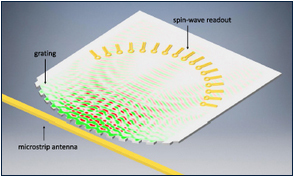 Abstract:  Spin waves are modes that exist in magnetic media due to Maxwellian fields and quantum mechanical fields (exchange interaction) between magnetic moments. These waves exist at frequencies between 1 and 100 GHz and can couple to microwave and millimeter-wave circuits, yet they have propagation velocities as slow as 100 to 1000 m/s. As a result, wavelengths tend to be 1-100 micrometers when propagation is dominated by Maxwellian dipole forces (magnetostatic waves) and less than a micrometer in wavelength when dominated by exchange forces (spin waves). Spin waves can also behave non-linearly due to the fact that magnetic materials have finite saturation magnetization. These two intrinsic qualities make spin waves incredibly useful for a variety of applications, including frequency and amplitude filtering, true-time delays, tunable circuits, non-reciprocal devices, attenuators, and boolean and wave-based computing.

Nonetheless, these devices and applications require conversion from electromagnetic signals to spin waves and vice versa. This transduction is inefficient, partly due to the difference in wavelength scale and partly due to the lack of fully-coupled cross-domain simulation tools. Most numerical simulation approaches for linear spin waves typically apply some simplifying assumptions to solve the coupled problem. Some analytical solutions with approximations do exist for simple structures and almost exclusively magnetostatic waves. For exchange regime waves, there has been little work done to quantify transducer and system efficiency.

The purpose of this work is to study the efficiency of EM-to-spin-wave transducers in both the dipole and exchange regime, and will be both theoretical and experimental in nature. In this work, the intrinsic radiation impedance of spin waves in the magnetostatic and exchange regime are studied theoretically, followed by several practical transducer examples, one of which is suitable for wide-band transduction of spin waves. A discussion on spin wave bandwidth and an appropriate definition for transduction bandwidth is proposed. The future work proposed in this candidacy is to design and build a calibrated time-resolved Magneto-optic Kerr Effect (MOKE) that will enable the experimental validation of various transducer designs, including investigation of transducer efficiency, bandwidth, localization of spin-wave launch sites, and system-level figures of merit.